We Are Here in the Cotswolds in Lieu of a Divorce

“We are here on this island in the middle of the Pacific in lieu of filing for a divorce” is a line from one of my favourite books, The White Album, by Joan Didion. I suspect husband and I first found ourselves in the Cotswolds in lieu of mourning. It was around the time of his mother’s death when we started looking for cottages to buy last summer. The feverish pace of our viewings and an impetuous string of unreasonable offers gave it away.

But this quickly morphed into a concern that we were in the Cotswolds in lieu of facing the reality of our relationship. This was most often voiced in the midst of a flaming fight as: “Our marriage is fucked. We have no right to buy a second home, we can’t even get along.” Add in our combined Protestant guilt dictating a second home is a sinful indulgence, and we were truly fucked.

I thought about all this when I was in New York last month and met up with an old friend from university for dinner. We have a lot in common despite the fact that she is a new mother and I am childless. Like my husband, she suffers from depression. Like her husband, I’ve blamed some of my own issues on my spouse’s depression. All four of us struggle with the elusive balance between fulfilling work and paying the bills. She told me how the baby has been a joyful experience and at the same time very hard on her marriage. To let her know not she is not alone I shared this story about the day my marriage was most fucked in the Cotswolds.

Husband and I were at last year’s summer fair in the field behind the cottage we now own. The local cricket team was running a BBQ and husband and I were standing in line. He turned to me to demand something. I don’t remember what. Another hamburger? What I do remember is that his mouth was still full with his first hamburger and his contempt was both perfect and complete as he barked his order at me. I headed for the drinks tent to buy myself a beer and give myself some mental cool down space. I was furious about the way he had spoken to me, much less in public.

Like the best spousal spats, this one had pressed all my childhood hot buttons about my father behaving like a monster towards my mother. In two seconds I was back on Shalley Circle in the swimming pool with my childhood friend Patti Stephenson. As my father’s shouting boomed out the louvered windows of his den onto the patio, I bobbed furiously, mortified, willing him to shut up, and acknowledging nothing to Patti.

Back at the summer fair husband and I spent the next half an hour on various machinations over mobile phones, laughable in a town the size of a postage stamp with mobile reception only if you stand on one foot in the market square with the wind blowing in the right direction. This culminated in a declaration from husband that we were leaving, a well worn party trick of his. It works like this: when he’s mad at me he threatens not do something I want to do or to leave somewhere he knows I want to stay; I get hooked, never mind the fact that by the time this happens the situation has invariably become so unpleasant that any person in his right mind would also want to go.

Once in the car headed for London it was husband’s turn to have his childhood hot buttons pressed. I was screaming and spitting and morphing before his very eyes into his schizophrenic mother wielding an axe on the hood of his father’s car. Personally I think that’s a reasonable tactic for a wife and mother to engage to try and prevent her alcoholic husband from going to the pub, but that’s another story.

Luckily, where both husband and I differ from our parents is in our ability to back down from a fight almost as quickly as we got there. It took about 30 miles before we had a tearful reconciliation at a Tesco gas station on the A40. We made it back to the summer fair in time to see six black labs performing tricks in the field.

In the end I told my friend in New York divorce was out of the question. It would be too embarrassing to have to tell people I left husband for talking to me with his mouth full. 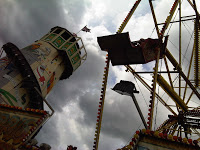 How to Avoid Embarrassment and Be a First Class Guest