The Great British Summer is officially here. Thousands marked the summer solstice by watching the sun rise at Stonehenge, but I took my cue from a more traditional kick-off to the summer calendar: Royal Ascot. While I did not attend this year, I did catch a glimpse on television and was struck by just how anachronous the whole spectacle appeared. A BBC commentator was interviewing the aged couple who owned the horse that had just won a race. He was stiff in his stove top hat and blunt cut morning coat, showing no hint of pleasure at his victory. She was excessively coordinated: shoes, bag, dress, jacket, and lampshade hat all in shades of black and white. Both were completely lacking in the sartorial ease that characterizes our fashionable neighbors across the channel. I daresay the addiction to matching coordinates exhibited by m’lady would be enough to make mademoiselle strangle herself with her Hermès scarf or gouge her eyes out with her Chanel ballerina flats.

Still I am smitten with all forms of British tradition, and yesterday we attended a more casual yet equally important event in the summer social calendar: the first fête of the season. We cycled over to Chedworth where the weather behaved as expected—wind, drizzle, sun, and clouds in alternating cycles of approximately fifteen minutes each—while the whole village defiantly carried on with the requisite fête activities of jumble sale, Tombola, barbecue, dog show, and chuck-the-wellie competition, with tea and cakes served in the village hall. There will be one of these every weekend day in a village somewhere in the Cotswolds from now until the end of August, including our own Charter Fair next Saturday. We are, somewhat distressingly for my romantic fantasy of my quaint rural life, a town rather than a village, owing to a charter granted by King Henry III in 1227 giving us rights to hold both a weekly market and an annual fair. Thus we have a fair rather than a fête.

As such, we have to make a bit more of an effort. Rustic amusements such as chuck-the-wellie would just seem out of place amongst the grandeur of a climbing wall and vintage chair-o-plane rides and, gasp, a fire engine. (The fire engine appears twice on the official programme of events. First, we pause for its entrance, then the band plays a bit more, and then, we have a designated time slot to admire it.) Faced with such excitement the wine bar has chosen to shut its doors for the day. The memories of last year’s deluge of punters asking to use their facilities and the unseemly smells wafting in from the cricket team’s barbecue stand were just too much.

Personally, I think they’re overreacting. It reminds me of the response of Notting Hill’s posher residents to that other great British summer event, the Notting Hill Carnival. Many West London home owners board up their stucco terraces and flee the city while the rest of London floods in for three days of food, floats, and Red Stripe induced fights. More than a few of these Notting Hill refugees will be heading for the retreat of their weekend homes in the Cotswolds where they may happen upon the quaint charms of a local fête. Should they arrive at our Charter Fair next weekend they will no doubt be disappointed to find such charms are not to be enjoyed over a glass of rosé .

Dear J, I will be sending you the latest glossy brochure of the Boylestone Show which this year promises to be even bigger than the Olympics. Your accom has been arranged here and we suggest you come Friday 22nd and leave when you feel up to it. Cheers. B&R

Said glossy brochure arrived today. Would think I’ve been invited for a weekend at Highgrove. Am over the moon just reading the Rules and Conditions of Entry, which are very serious indeed:
1. All entries to be submitted between 10am and 12noon and to remain on show until 4:30pm
2. No competitor may win more than ONE PRIZE in any class.
3. The Judge’s decision is FINAL
4. Horticulture and Cookery entries not claimed by 4:45pm deemed to have been given to the Village Hall and will be auctioned at 5:15pm.
5. Any protest must be made in writing, and the Committee will re-allocate prizes accordingly if the protest is upheld.
6. The Committee, while taking ordinary care, will not be responsible for any loss or damage to exhibits.
7. All exhibits shall have been made or grown by the exhibitor.
8. The winners of the Challeng Cups MUST undertake to return them to the Chairman at least two weeks before the Annual Show.

Boylestone isn’t in the Cotswolds, but now well into my second summer season in the Cotswolds it still sets the standard for me when it comes to the English tradition of village fetes/shows. This is what I wrote about it after my first visit in 2005. Sadly, Barbara the landlady has since passed away.:

Our afternoon started in the lovely, head ducking, timber-beamed pub, The Rose and Crown. The landlady, Barbara, looks alarmingly like Barbara Bush and greeted husband and me like regulars, including calling us “duck.” We ordered half-pints of Pedigree bitter (“Pedi”) and white rolls filled with roast beef and cheese. Someone had brought a pork pie and put it on the bar to share with a little dish of English mustard. While we ate, I admired the framed picture on the wall of Barbara and other villagers at the recent wedding of Charles and Camilla. For such a small place, there sure were a lot of them at the big event (apparently the village was a favourite of Charles’ from the days of the hunt). Next to the picture was a framed thank you note from the royal couple, graciously acknowledging the gift of a walking stick. Watered and fed, we walked to the Village Hall and Parish Church.

The Village Hall hosted the horticultural section of the show and S., a local doctor and home gardener, gave me a guided tour. For each plate of “six perfect shallots,” S. provided careful details of village provenance. There were speckled eggs, apples, pears, plums, runner beans, cauliflower and cabbage. Glossy red onions wore decorative green ties around their tops. Enormous marrows and elaborate vegetable boxes (category: “Collection of six kinds of home-grown vegetables in a box not larger than 2 foot square”) dominated the far wall. Rows of brilliant dahlias (large, medium, pom-pom, cactus), asters and gladioli ran the length of the hall.

Inside the church were the cookery, craft, flower arrangement, junior, teenage and photographic section entries. I took mental note of the items I wanted to bid on in the upcoming auction, including a child’s cap knitted to resemble a Christmas pudding, homemade wines, lemon curd, pickled onions, and Bakewell tarts (my favorite dessert).

At 5:15PM, the auction began. In no time, I worked myself into a frenzy worthy of a Damien Hirst on the block at Sotheby’s. A successful bid on the second place winner in the “Home-made Wine – Dry” category yielded me a bottle labelled “Parsip and Ginge.” Presumably this meant parsnip and ginger, an understandable mistake if the winemaker penned the label after consuming some of his or her own wares.

Six shortbread biscuits and a box of tomatoes later, I engaged in a fierce battle for a Bakewell tart. The bidding and my desperation escalated in step until husband gallantly interceded with a decisive bid of ₤5. Never have I felt so in love. When it was all over we also owned a trio of leeks, a baffling quantity of red onions, and a box of fancy Thornton’s mints that my husband won in the raffle — easily the best ₤10 we spent all summer. 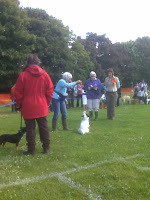 On Saturday we went to the summer fete in the village where we first rented a cottage in the Cotswolds. Dorothy was on duty collecting the £1 entrance fee. She’s getting a bit forgetful (she tried to get me to pay twice!) but she can still add up your bill in her head when you buy supplies from her at the village shop she runs most days. Jean was also there, busy judging the various dog classes, my favourite of which was “dog with the waggiest tail.” There were way more ribbons on offer than dogs in the village.

On Sunday we went back to the village for church. Jean was on duty again, this time as a lay minister leading matins. Dorothy was there too and led a prayer that covered victims of friendly fire in Afghanistan, knife crime in London, and, of course, the Queen (“an inspiration”).

These two older ladies (Dorothy is 80, Jean 60+) make up over twenty percent of the normal Sunday congregation in addition to their myriad of other civic duties. It makes me wonder what will happen when they are gone. There is the younger Chris, who is the local post-mistress (until her post office closes later this summer and she becomes solely a shop-mistress) and was on duty at the fete dispensing tea and cakes.

Another country lady who caught my attention this week was Mrs. Moneypenny, a columnist in the Weekend FT. Her Sunday piece was essentially a retelling of an evening at a country house where Mrs. Moneypenny got very pissed and passed out on the bathroom floor – not what I’d expect to read from a very successful businesswoman with three kids (her cost centres as she calls them) and a husband, although I was highly amused. After three years away from the puritanical bonds of the United States, I am still taken aback at the friendly ease with which tales of excess are thrown about the workplace, or the national media in this case. I remember when I used to do quaint things like hide the fact that I was hungover from my boss.