Having drank up memoir and literary fiction in the first three Book & Bottles, I thought I’d try some genre fiction for the fourth round. When I’ve read detective novels in the past, it’s usually been prompted by a curiosity or affinity with a place, thus Donna Leon’s Commissario Guido Brunetti series set in Venice and Martin O’Brien’s Jacquot novels set in Marseille.

This time was no different. Michael Dibdin’s 1998 Aurelio Zen mystery, A Long Finish, is set in Piedmont in the north of Italy amongst winemakers and truffle hunters. I was jumping into the middle of a series—the sixth of eleven books—but it seemed like a good excuse to get to know more about Barolo and Barbaresco.

In the setup for the novel, a winemaker has been killed in a grisly murder for which his son has been arrested. A famous director and obsessive wine collector based in Rome enlists the services of Dottor Zen, a Criminapol officer—not for the sake of justice, but rather to get the accused son out of jail to ensure that the vintage is produced that year and the director’s wine collection is therefore completed. In return, he will use his clout to help Zen secure a prime location for his next post, a fact that isn’t supposed to make us think less of Zen but rather establish the realities of law enforcement in Italy.

The director gives us our first lesson on wine:

Barolo is the Bach of wine…Strong, supremely structured, a little forbidding, but absolutely fundamental. Barbaresco is the Beethoven, taking those qualities and lifting them to heights of subjective passion and pain that have never been surpassed. And Brunello is its Brahms, the softer, fuller romantic afterglow of so much strenuous excess.

Thankfully we are not subjected to anymore of the director’s pontificating beyond the second chapter. Instead, a mystery within the mystery emerges, this one involving a stalker who calls Zen in his hotel room in Alba using a voice changer to disguise her identity. It turns into one thread in a broader theme of Zen’s obsession with paternity.

The other thread of this theme began earlier when Zen told the director that he has a son, a baby named Carlo. Shortly after we learn that a woman “with whom he had once had a transient, desultory affair” had aborted a pregnancy for which she claimed he was responsible. This pregnancy is presumably the basis for Zen’s earlier declaration of fatherhood, as well as a bizarre episode midway through the book in which Zen inhales some secondhand hashish, mistakes the word “sun” for “son,” then proclaims to his companions, “I never told you I had a son! And I don’t. He’s dead. She killed him, and I wasn’t even there!”

And yet this is nothing compared to the denouement of this particular plot line in which, spoiler alert, Zen decides to let an adult woman—the mystery caller—believe he is her biological father despite having genetic proof otherwise. Perhaps the outcome of his previous experience in the “transient, desultory” affair is supposed to explain this choice, but this is not a plot line that has aged well. Zen rationales to himself,

Acquiring a twenty-something daughter about whom he knew next to nothing certainly promised to be interesting—and if it goes seriously off the rails, a weasel voice reminded him, you can always tell her the truth.

Weasel voice indeed. At this point—actually far earlier—I needed a drink. Forget about the Beethovens and Bachs of wine. I just needed something to get me through the remaining pages without my head blowing off in a feminist rage. Plentiful and cheap were my criteria, and there it was, prominently displayed as I entered the wine store: a €7.99 bottle of a red blend from Piedmont with a truffle hound on the label. (Dibdin would have done well to give us more of Anna, the truffle hound belonging to another local who turns up dead after the winemaker Manlio Vincenzo is first murdered. Alas, we get nothing so likable as a dog.)

The wine was drinkable enough, and the label, twee as it might be, was subtler than some of the similes Dibdin hoists on the reader. My favorites include:

At dawn the next morning, as the dull exhausted light strained to heave the insensible darkness off the lagoon like an elderly whore trying to get out from under a drunken client…

A vision of her supine and naked, her large breasts lolling around on her chest like half-trained puppies with a mind of their own. 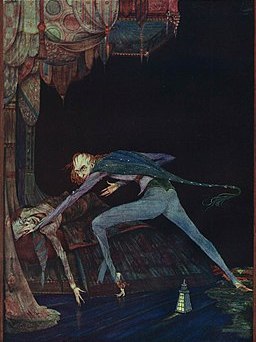 Back to the “murder-in-wine-country” strand of the book, things aren’t going much better. The dead winemaker’s son had originally been arrested for his father’s murder under the pretense that his father was a homophobe and the son, who was gay, murdered him in a fit of rage. Soon we learn that, doh!, it was all a big misunderstanding: the son’s betrothed, Andrea, is just an American woman, not the Italian man his father assumed an Andrea would be. Meanwhile, the dead bodies keep piling up.

Despite its flaws, the last chapter of the book, which wraps up the mainline murder plot, is a corker. In his acknowledgements, Dibdin cites Poe and The Cask of Amontillado, claiming “a few echoes of which may be discerned in the second chapter.” I will offer no spoilers here other than to say I think it’s actually the last chapter that’s pure Poe. I haven’t felt so deliciously creeped out by a closing scene since I watched a black-and-white version of The Tell-Tale Heart in my sixth-grade English class. The finish, unlike the rest of the book, wasn’t long enough.