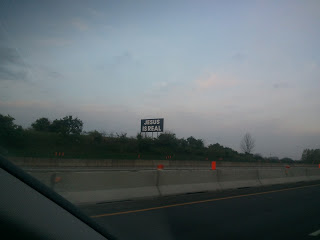 So here we are on day five of our cross-country trip marking our return to L.A. By the fourth day I was starting to recognize the common threads between states, at least judging by the billboards along the interstate. The biggest surprise was that every state we have passed through has wineries. I had heard about Finger Lakes, NY wines, but the domains du Pennsylvania, Ohio, Indiana and Missouri were news to me. Also, and I feel very ignorant saying this, all the states have native American ancestry, even if it only shows up in a junky gift shop or a casino.

The Jesus signs started in Ohio. They kicked off with a doozie: “I knew you before you were in the womb. —God.” This reminded me of two things. First, no doubt unintentionally, it reminded me of a zen koan: “who were you before your parents were born?” It also reminded me of when I was driven to college in North Carolina for the first time and, as we entered the state, we were greeted by a gigantic Abortion is Murder billboard. I was coming from the geographic south in Florida, but that sign is how I knew I was entering the real south.

I also enjoyed the Jesus is Real billboard. For a second I wondered where Sarah Silverman’s head was on it, then I remembered her show was called Jesus is Magic. A stretch of highway in Indiana maintained by the Association of Christian Truckers gave me a chuckle. The best, though, was: Need directions? Read the Bible. It appeared right before a billboard for a shooting range.

Turns out you really can know America from her billboards.