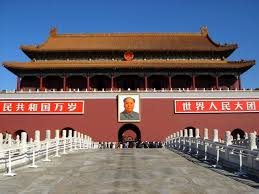 I leave shortly for a work trip to Beijing.  The last time I was in Beijing was about eighteen years ago.  I was a graduate student in Singapore on my way to visit an old college boyfriend—let’s call him OCB, which sounds pleasingly similar to ODB—who was working outside of Tsingtao.  OCB was too busy to meet me in Beijing, but it seemed crazy to visit China without first stopping in the capital city to take in some of the sights.  So OCB arranged to have another one of his ex-girlfriends, a petite French woman named Agnès who was living in Beijing, take me around the city.  I was pretty naive at twenty-two, but even I could smell the potential awkwardness in this arrangement.  (It was awkward enough that I was flying to China to meet up with an old flame, but somehow that had failed to register.)

Agnès picked me up at my hotel on my first night in town and pedalled me, a large American woman, on the handlebars of her bike to a Muslim part of town where we bought flat breads and beer from street vendors, then sat around consuming them at street-side plastic tables.  To this day I don’t know if Agnès was trying to give me an off the beaten path experience or if taking me to this dingy street was some kind of joke.  Either way, the next day I decided I would take in the Forbidden City and Mao’s tomb on my own.

And so it is that my abiding memories of my first visit to China are not of golden pagodas but of golden showers (explained that is) and French girlfriends of old boyfriends.  I have no idea what this visit holds for me, but odds are the memories will be improved.

L is for Les Ions