My family has been coming to Canters Deli on Fairfax Avenue in Los Angeles as long as I can remember, which is at least part of the reason why I am so irritated that my mother has just asked the waiter for a cup of matzo. How can she not know after thirty-plus years that matzo ball soup (at Canters at least) only comes by the bowl and not by the cup? And why is she asking the waiter for a cup of matzo, leaving out the “ball soup” part? Does she want a cup of unleavened crackers? My ninety-year old grandmother sits oblivious at the other end of our horseshoe-shaped, baby shit brown vinyl booth. Her head is suspended above the table at a forty-five degree angle, like a wrecking ball swinging from a crane, as she clutches half a corned beef on rye in both hands. A frosted coral mouth swoops in to take a bite, the red ragged edges of the meat protruding lasciviously from between the crusts while a small fly nests in her silvery helmet of hair. I am too transfixed by the scene of savagery—of old age, our food chain, of all of human history—even to swat it away.

But I cannot hold my mother’s obliviousness to matzo ball soup ordering etiquette accountable for my crotchety and pondering mood. I blame it on the cumulative contents of the vacation thus far, a pseudo vacation really, which started a week ago when we arrived in Florida to attend my twentieth high school reunion. On our first morning we brunched with my old childhood friend, A., at News Cafe on South Beach. Over eggs we talked of disease—my MS scare and her mother’s lymphoma. In matter of fact terms she explained that her mother is managing her disease but at the same time it is likely this is what she will die from. After breakfast we headed west for the reunion in Fort Myers. From within the air conditioned confines of her husband’s Mercedes (used, as she pointed out for what seemed like no particular reason), she updated us on the financial meltdown that is dominating her immediate family’s life. The story lasted the length of Alligator Alley and was littered with the usual suspects: commercial real estate market collapse, foreclosures, lawsuits, soured friendships, pondering when to pull a child out of private school. She talked about leaving Miami and starting over in Greenville, S.C. (where they’re “all just sitting around drinking a beer on the front porch”), dropping the word bankruptcy into the conversation as if she were breaking in a new pair of shoes by wearing them around the house. Throughout she was detached and impressively philosophical. It might be “the best thing that ever happened to our family” she mused before adding the admirable dose of self-flagellation: “We were very materialistic.”

A. and I have always had a kind of low-level, background competitiveness lingering in our relationship. We attended the the same high school and university. At both she outshone me in popularity (cheerleader, homecoming court) which I liked to think I made up for by marginally edging her out academically. But years ago A. had won hands down in the traditional success stakes: a stay at home mom with three kids and a wildly successful businessman of a husband. Last year she posted a picture of her ridiculously attractive and stylish family on Facebook and I joked with her to take down the ad from the Ralph Lauren catalog and stop pretending it was her family. I am relieved that my sub-conscious had the dignity not to feel a shred of victory over her current plight. My psyche somehow needed this better, richer version of me and without her I felt a little bit lost.

The reunion wasn’t all glum news. I reminisced with one of my oldest pals, J., about how in third grade we used to fight over who got Scott Baio and who got Jimmy McNichol in our imaginary boyfriend playdates in our imaginary hot tub. I had a snatched catchup with S., one of the few black girls in our high school class, just before we sat down for our Hawaiian-themed buffet dinner. She had been tall and athletic looking back in high school and still was. I had enough time to find out she was living in Atlanta, a teacher of some sort, in graduate school, and dating a long haul truck driver. I wish I would’ve talked to her more. I reconnected with P., whose older sister used to regale us on sleepovers by demonstrating her ability to open a beer bottle between her ample breasts. Back then P., like me, favoured an Aqua Net encrusted set of bouffant bangs, and we spent many Friday nights perfecting them with the curling iron before heading out in her red Honda CRX.After the reunion we flew to Los Angeles, where in addition to the matzo ball soup incident, I was subjected to twice daily nervous breakdowns by husband on the topic of why we ever left this sunny paradise. In between he checked his BlackBerry and muttered conspiracy theories about what was happening in his absence from work. I tried to ignore him and focus on the intense joy I experienced in our daily Mexican pilgrimages to Gilberts El Indio or Holy Guacamole, but the truth is I was starting to wonder why we ever left L.A. too. And herein lies the lesson: vacationing in your past is a dangerous game at which I had excelled. In ten days I managed to wedge in the entire psychological landscape of my childhood plus a good dose of mortality, which explains how I came to observe the whole sordid spectre of human history in that fly sitting on my grandmother’s head in a booth of a Jewish deli. I resolve to spend next year’s summer vacation firmly in the present, preferably someplace without BlackBerry connectivity. 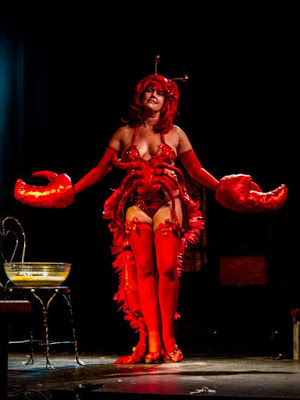 Some thoughts on MS, AI, and novelty human exoskeletons

Giving Thanks for Failure