Life is Not a Petting Zoo

The other night I went to see David Sedaris at a venue here in Berlin.  He was signing books in the lobby before the reading started, so I lined up hoping to get a photograph with him.  When it was my turn I apologized for not having a book for him to sign but swore I was a big fan, gushed about how many hours of reading pleasure he had brought me, and asked for a pic.  “Oh, I never do photographs,” he replied before being whisked into the auditorium by a stern German frau.

As I took my seat I was sore at his refusal.  After experiencing a few years of obliging authors at the Cheltenham Literature Festival, I had come to think I was entitled to posting pictures of myself with authors I admire on Facebook.  I felt like yelling out to David, only three rows away, that Alain de Botton didn’t mind having his picture taken!  Who did he think he was?  Instead, I sat quietly while Mr. Sedaris explained that the book he was there to promote, Squirrel Seeks Chipmunk, had been titled Life is Not a Petting Zoo in Germany.  OK, I thought, I am being unreasonable.  Maybe having his picture taken makes him feel like he is in a petting zoo.

Mr. Sedaris then proceeded to strap on a pair of bunny ears he had bought in a shop next door to his hotel in Berlin.  How could he resist, he explained, when they were so perfect for the story he was about to read: a fable about an aggressive bunny who kills a bunch of innocent creatures in a misguided effort to protect his woodland community, failing to notice the real predators until it’s too late.  In the end the wolves get the bunny, and the bunny gets what he deserves.

As Mr. Sedaris spoke, I noticed a man in the row in front of me surreptitiously videotaping him on his mobile phone.  Others snapped the bunny ear-bedecked author from their seats.  And in the end, I couldn’t help thinking the author got what he deserved. 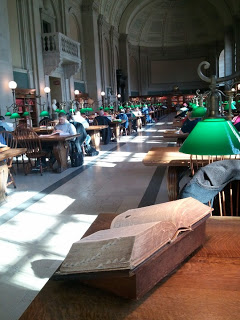