The Wheatsheaf Inn book club took a field trip to London last Thursday to attend Book Slam, self-described as London’s best literary night club. We went to see William Boyd read, having recently finished his novel, Any Human Heart. Mr. Boyd, or Lord William of Boyd as our emcee referred to him, delivered both the gripping first chapter of his new novel, Ordinary Thunderstorms, and a humorous short story about a man whose life is defined by kleptomania of varying degrees.

The other literary guest of the evening was poet Don Paterson, with whom I was unfamiliar. I have a hard enough time trying to read poetry so I held out little hope for absorbing verse read aloud to a crowded, Chenin Blanc soaked room. But almost a week later it’s one of Paterson’s poems, The Lie, that has stuck with me — not exact words but his image of the lie, a boy of three or four, shackled in some hidden room in his house, grotesque from his years of confinement. A large glass and a half into my own Chenin Blanc submersion and influenced by Paterson’s repeated apologies for reading poems about divorce and death, I interpreted The Lie as being about his own divorce. The boy to whom he tends so faithfully and yet from whom he has remained detached for “thirteen years or more” is any one of the number of small lies in our relationships, lies that somehow culminate in that one big lie, that everything is just fine.

Husband and I have a different approach to our marriage, although I’m not sure it’s any better than the lie. We are, if anything, too honest, holding nothing back, particularly when we fight which is often. Bickering is our lingua franca, escalating more often than I’d like into full-blown, no holds barred, verbal WWF matches in which there are no failures to acknowledge that which the other perceives as lacking: sex, mental health, something to say to each other at the dinner table. Our lie is free, hopped up on sugar, and tearing around the house wailing like a banshee.

To Madge or Not To Madge 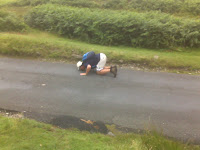