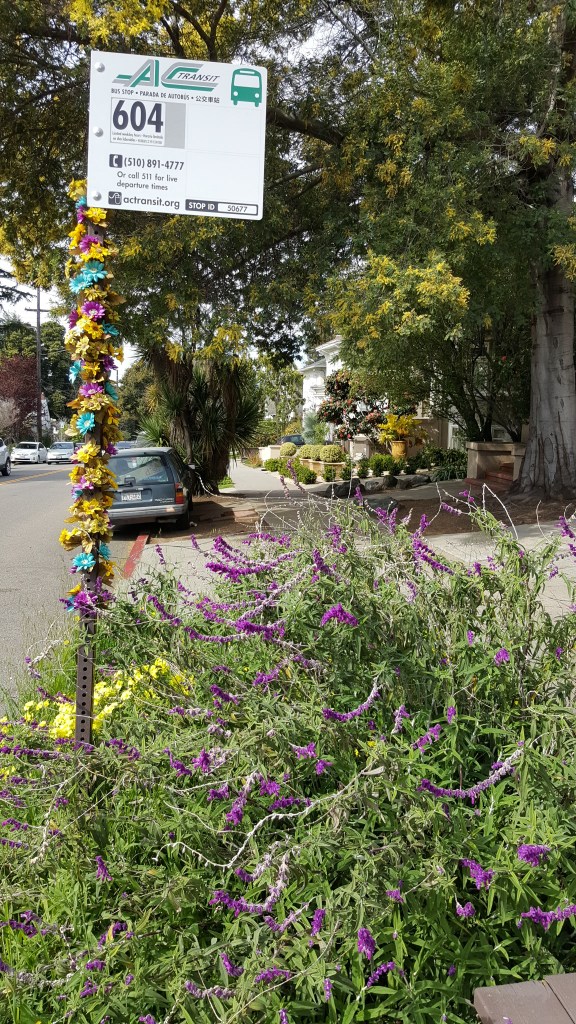 I skipped kindergarten, which may explain why at age forty-five I still haven’t learned everything I need to know. I require periodic reminders of the most basic tenets of human decency, which is where the bus comes in.

I hadn’t intended to start riding the bus when I moved to Berkeley for work back in January. I rented an apartment less than two miles from the office so I could walk or bike my commute. Then California had one of the wettest winters on record, and the advantages of a bus stop two blocks from my front door became clear.

The bus route to my office runs alongside the Cal campus, and my fellow-bus riders were often college students. The first time I heard one of them say “thank you” to the bus driver as she got off the bus, I assumed it was an oddity. This student was surely from Kansas or someplace where people still said “aw shucks” and “gee willikers.” Then I noticed everyone—except me—said “thank you” when they got off the bus, and the bus driver usually said “you’re welcome” back. I briefly felt like an asshole, then I, too, started saying “thank you” when I got off the bus. This felt good in a way that was disproportionate to the act. It was shocking how nice it felt to be nice.

(In fairness, I don’t think my failure to vocalize gratitude after every bus ride was a breach of global public transit etiquette. A decade earlier I had lived in London and been a regular bus commuter. There I witnessed many interesting behaviors aboard a double-decker, occasionally involving the expulsion of bodily fluids—but nobody said “thank you.” The closest I got to a life lesson from that experience was to wash my hands a lot. I’ve never had more colds in my life than my first six months in London riding the 23.)

The next thing I started to notice while riding the bus in Berkeley was how many wheelchair users rely on it. Roughly every third time I boarded a bus, someone in a wheelchair did the same. There’s a procedure for this, starting with the driver lowering the bus, extending the ramp, then leaving her seat to fix the wheelchair in place using a set of straps with hooks. Nobody else can board the bus until the driver is back in her seat and the ramp is up.

The whole thing usually takes a few minutes and yet it’s long enough to notice. And what I noticed is how rarely in daily life I, a non-parent, defer to the needs of someone else. I operate my life in a series of maneuvers designed to maximize, well, me, and the on-demand economy is complicit in my selfishness. The few minutes of stillness, of waiting, while someone else goes first reminded me that most the time I’m in a hurry for absolutely no reason other than to be in a hurry. I’m addicted to self-inflicted stress. Waiting my turn was good for the soul.

In late spring the rain finally stopped and I mostly traded the bus for my bike. Occasionally I make exceptions, like when I need to be in the office for 6:00AM calls with my European colleagues. This happened twice in the last week, and the timing couldn’t have been better. My experience on the 5:34AM showed me I had relapsed and was due for a refresher course in decency.

That early in the morning most stops on the route are empty, and the bus makes it to my destination in half the normal time. But on Tuesday we stopped somewhere near Cal for a gentleman with a cane. I was nose-deep in my phone reading work email and yet somehow felt annoyed when he chose to bypass the priority seats in the front. The bus waited while he instead made his way to a seat up the half-set of stairs, just behind the rear door. There I was again, in a hurry when I wasn’t even late and being an asshole in the process.

On Thursday, we stopped at the same stop for the same gentleman. As he got on, the bus driver bantered with him about the Oakland victory parade for the Golden State Warriors later that day. Then I watched as again he made his way to the same spot behind the rear door. He was dressed impeccably: a white fedora with a black-ribbon band decorated with a small feather, a single-breasted overcoat atop a suit, and a crocodile-embossed bag hanging diagonally across his shoulders. I was reminded of an episode of the nineties sitcom Just Shoot Me! in which the character of Nina Van Horn, a fashion-magazine editor, blames the downfall of civilization on the rise of casual separates. It seemed to me this gentleman was making a similar case.

I was lost in thought about it when we arrived at my stop and mechanically got off through the rear doors. As I walked by the outside of the bus I snapped to, just in time to say “thank you” to the driver through the still-open front door.

All My Friends Are Over Fifty

Americashire Out Now and an Invitation