We spent a rare Friday night in London last night to see Priscilla, the musical based on the film Priscilla Queen of the Desert, with R and R, aka the only gays in the village (although strictly speaking that isn’t true, I still like to call them that). I am still buzzing from the experience, breaking into the occasional disco classic as I read the paper and soak in the bath. It was just the thing to cheer you up after a dreadful week, one that say started with waking up at 3:30am on Monday morning and not being able to fall back asleep despite the fact you had to get out of bed at 5:30am to drive into London for a day of meetings with your new boss, followed by an 8:45am shouting match in which you are forced to threaten divorce in order to get your spouse to lend you his flat keys since he has given your set away to the plumber and is now inexplicably refusing to part with his, which in turn necessitates that you have to pay an extra non-expensable £15 to park in one of only two garages in Soho because it is supposedly ‘closed’ for construction unless you agree to have your car washed, all so you can be marginally on time. Let’s just say the week continued as it had started and a big gay— in both senses of the word—musical was just the thing to salvage it. It was like going to the best disco ever on Halloween in West Hollywood (only you could sit without feeling conspicuous). My favorite costume hands down was the literal take on Who Left the Cake Out in the Rain—a giant cupcake with illuminated candle hat covered by a transparent umbrella streaming tinsel. The tickets were comps from husband’s work, proving he is useful for something if not keys. He reported that bar takings at Priscilla are setting records, a trend with which we happily aligned.

The Town that Architects Forgot 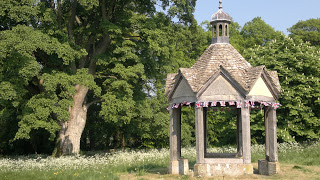