The Boylestone Show and its giant vegetables came and went without us on Saturday. I wrote about my unforgivably blasé attitude in my last blog, but that wasn’t the only obstacle to our attendance. It turns out our longstanding hosts and pillars of the Boylestone community, B&R, abandoned their own village show and are currently cruising the Med. We were lucky, however, to be able to spend our Saturday afternoon in the company of B&R’s daughter-in-law, T., and grandson, J. They are friends from Los Angeles and were over to launch J’s boarding school career at Repton. It is a bold move for a 15 year old from Malibu to willingly launch himself into Britain’s public school system, and we celebrated with pizzas in south London.

It takes a lot to get husband to abandon the Cotswolds and drive into London on a Saturday, but seeing T&J was a worthy reason. In the process we proved that getting to south London from anywhere—even other parts of south London as friends who joined us from Greenwich proved when they hit roadworks—is painful. It took us three hours to navigate our way to Streatham from the Cotswolds, impeded on both they way in and the way out by traffic for the Chelsea match. (Don’t ask me why we went through Chelsea to get to Streatham from the Cotswolds. I blame the sat nav.)

In any case, we had anticipated as much effort and decided to make the most out of being in London by spending the night at the flat. We booked a film at the Electric for the evening and planned a jog around Kensington Gardens followed by brunch at Raoul’s on Sunday morning. Despite the Chelsea traffic, we made it to Portobello Road on time for the movie. It wasn’t until the film finished and we were wandering around the darkened streets that we realized our miscalculation. Most of Ledbury Road and Westbourne Grove were boarded up. Notting Hill was a ghost town, its residents all in exile in preparation for the annual Carnival that would take over the neighborhood on Sunday and Monday. We headed into Bayswater for some noodles and replanned the weekend. By 7:30AM the next morning our escape from London was underway as we bombed along the Harrow Road just ahead of the police putting up barriers behind us. 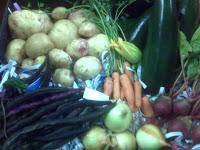 My Marrow is Bigger than Yours

Four Seasons in a Day