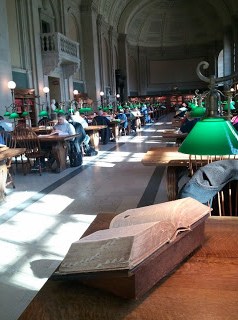 This morning I attended a book sale in the basement of the Boston Public Library.  I was there by chance, having seen a listing for the sale in a neighbourhood newspaper over breakfast.  I have been wanting to visit the library, and with husband out of town this was the perfect chance.

When I arrived  at ten minutes to ten there were already twenty or so misfits loitering in the very grand lobby of the old McKim building waiting for the doors to the sale to open.  (I know the architect’s name because after the book sale I geeked out even more and joined the library’s Saturday art and architecture tour.)  The public library is not where the beautiful people hang out on a Saturday morning.  We were a motley crew comprised of the elderly, the odd, and the possibly homeless, although winter clothing tends to make everyone look homeless.  What we all had in common other than a love of books was sensible shoes.  I was surrounded by the kind of people who wear running shoes with normal clothes and almost certainly never to run.

As if to tease us the first room of the sale was filled with romance novels.  Dispensing with this genre at least partially explained the oxymoron of a public library holding a book sale.  But why was T.S. Eliot on the poetry shelf in the next room, its spine still wearing a Dewey Decimal sticker and a manila pocket still intact on the inner back cover?  I nabbed The Cocktail Party and moved on to the New England section.

Despite the sedate surroundings, there was a distinct air of frenzy mingled with aggression as bibliophiles jockeyed for prime position from which to survey the thousands of cast-offs on offer.  A man sporting fresh-from-cataract-surgery-sunglasses and a red parka body blocked me from the Art shelf.  A middle-aged woman pleaded with a peroxide-haired man to watch the stack of books she had selected from the rolling cart of Music titles. He shrugged as if to say that what she left behind was fair game.  People carried plastic shopping baskets full of books or leaning tower of Pisa stacks.  My final selection of three seemed downright modest in comparison.

I made sacrifices along the way.  Larousse Gastronomique (only $10!) stayed put because it was too heavy to carry around for the rest of the day.  A pang of guilt over promising husband I would not buy any more books gave me the strength to resist Confessions of a Prairie Bitch by the woman who played Nellie Olsen on Little House on the Prairie.  I regret that one.  In the end it was the Eliot plus a collection of essays on New England Life called Here at Eagle Pond and a book by Ludwig Bemelmans called La Bonne Table.  (I bought the last because it had sweet line drawings and a chapter on the Tour d’Argent, only finding out after I got home and searched online that Bemelmans also wrote the Madeline books.)  I am starting to make friends with my Kindle lately, but for $5 I got all three of these gems.  How could I say no? 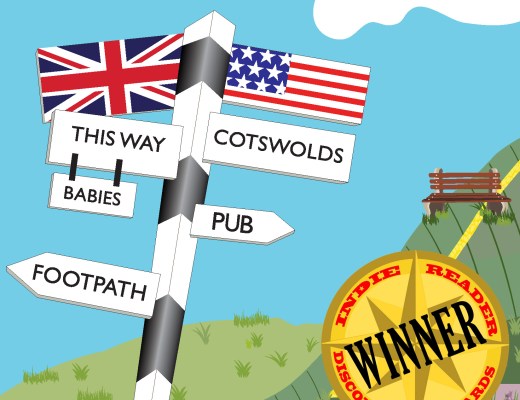 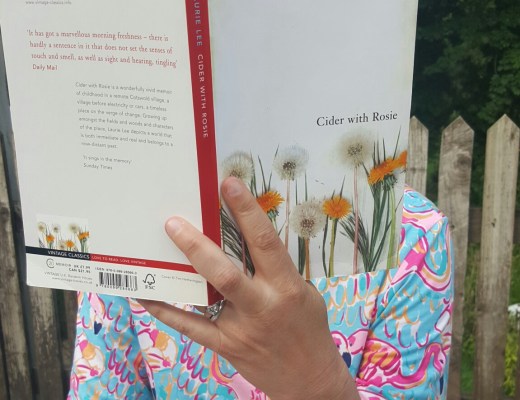