Best of the British Isles: A Gift Giving Guide for Anglophiles

It’s November, which means (hurrah!) it’s socially acceptable to start talking about holiday shopping. If you’re in need of a gift for the Anglophile in your life—even if that’s you—look no further than my list of favorite things hailing from or inspired by the British Isles.

Riley’s Gastronomic Guide is a charming illustrated map of all things edible in the British Isles. How else is a self-respecting Anglophile supposed to know where to find Star Gazy Pie?

It may not have made Riley’s Gastronomic Guide, but Grasmere Gingerbread in the heart of the Lake District deserves a mention. The village is best known for Dove Cottage, William Wordsworth’s former home, but the gingerbread that’s been produced there since the mid-nineteenth century is equally poetic. Luckily they deliver overseas.

You’re going to need some tea to wash down all that gingerbread and, short of moving to the Cotswolds, a piece of china from Emma Bridgewater is the easiest way to invoke that feeling of English cottage cozy. Plus, this line of English pottery has managed to do the seemingly impossible in creating tasteful tat to commemorate royal events. Prince George mug, anyone?

When we first moved to the Cotswolds, the Cirencester-based gentlemen’s clothier, Pakeman, Catto & Carter, was the destination of choice for my husband to suit up in the local garb (think corduroy, tweed, and the occasional velvet collar). Their selection of accessories includes pheasant cuff links, mother of pearl collar stays, and a flat cap made from their specially commissioned 150th anniversary tweed. I also love their selection of women’s pajamas.

Just in time for Christmas are three new offerings from classic British franchises. Sebastian Faulks brings us the first new Jeeves and Wooster novel in forty years, which makes a perfect pairing with Liberty’s Jeeve’s Bowler Hat table lamp. William Boyd has penned a new installment of James Bond, Solo, set in 1969 in West Africa, and Helen Fielding gives us the next phase in the life and times of Bridget Jones, now 51 (!), in Mad About the Boy. And, if you’re looking to try something new, I humbly suggest my own Cotswoldian memoir, Americashire: A Field Guide to a Marriage. 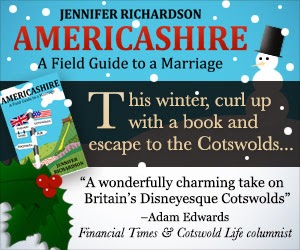