“If you like Bill Bryson’s travelogues, give this one a try.”

“A wonderfully charming and eclectic take on Britain’s Disneyesque Cotswolds by a droll Californian.”

“Richardson’s beautifully written memoir of her life in a tiny town in the Cotswolds is filled with fabulously eccentric characters, charming episodes, and some serious surprises.” 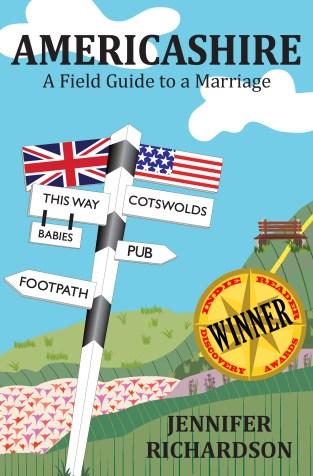 When an American woman and her British husband decide to buy a two-hundred-year-old cottage in the heart of the Cotswolds, they’re hoping for an escape from their London lives. Instead, their decision about whether or not to have a child plays out against a backdrop of village fêtes, rural rambles, and a cast of eccentrics clad in corduroy and tweed.

“A fine addition to the “English country life” genre, and will thoroughly charm the Anglophilic reader, or any fan of witty slice-of-life commentary. If you like Bill Bryson’s travelogues, give this one a try.”
—Catherine Langrerh for IndieReader. Click here for full review.

“Jennifer Richardson’s beautifully written memoir of her life in a tiny town in the Cotswolds is filled with fabulously eccentric characters, charming episodes, and some serious surprises. The book perfectly captures the hilarious peculiarities of country living with the posh set as well as those of a most unusual marriage.”
—Michael Flocker, New York Times best-selling author of The Metrosexual Guide to Style and The Hedonism Handbook

“In a style reminiscent of Bill Bryson, Richardson turns her wit and keen eye to both the absurdities and the charm of British country life. But, alongside the ludicrous fruitcake auctions and Toff fashion, she also tackles the very serious topics of illness, marriage, and the motherhood decision.”
—Lisa Manterfield, author of I’m Taking My Eggs and Going Home: How One Woman Dared to Say No to Motherhood and Founder, LifeWithoutbaby.com

“Richardson’s process of reproductive decision making is as genuine and as circuitous as the country walks she beautifully documents. I recommend this memoir to anyone on the fence or curious about the character and landscape of the childfree life.”
—Laura S. Scott, author of Two is Enough: A Couple’s Guide to Living Childless by Choice, and Director of the Childless by Choice Project

Set against the backdrop of English high-camp country-life, Americashire is a delight to read. A gutsy, mature and compassionate memoir that paints a moving portrait of a tricky but loving marriage, and the unexpected tough choices that life delivers us all, sooner or later.
—Jody Day, Founder, Gateway Women and author of Rocking the Life Unexpected: 12 Weeks to Your Plan B for a Meaningful and Fulfilling Life Without Children